Home to The Fortnightly of Chicago, the Helen and Bryan Lathrop House (Lathrop House) “serves as a peaceful place where the talents of the members may be enjoyed and the literary, artistic, and social concerns of the time discussed in an atmosphere of grace and friendliness.” (Fanny Butcher Bokum, 1948)

Designed by Charles Follen McKim and completed in 1892, Lathrop House is a notable example of Georgian Revival architecture. The New York architectural firm of McKim, Mead & White also designed several major buildings for the World’s Columbian Exposition of 1893, influencing civic and residential design throughout the country. 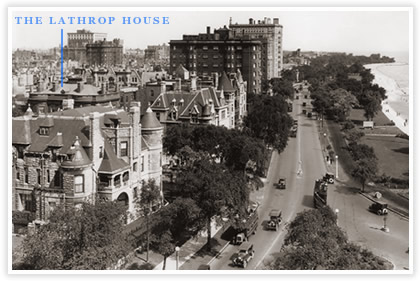 In the early 1920s the defining architectural elements
of the Lathrop House, the neoclassical bays, peeked over the turrets
of the McCormick House to the south. Soon gables and turrets along
North Lake Shore Drive were razed to make way for the
next big thing—apartment buildings.

In 1922, The Fortnightly of Chicago purchased the House from Helen Aldis Lathrop, a longtime member. Several changes (at the time of purchase and in subsequent years) have made the former private residence functional and inviting for the Fortnightly’s use.

The Fortnightly has been a conscientious steward of Lathrop House, which was designated as a Landmark by the City of Chicago in 1973 and was listed in the National Register of Historic Places in 1974. In 2014 Landmarks Illinois presented the Fortnightly with the prestigious Richard H. Driehaus Foundation Award for Stewardship, in recognition of ninety-two years of caring for and preserving the landmark house. At the presentation the Fortnightly was recognized as “the poster child for preservation stewardship in Chicago.”

Lathrop House is generally closed to the public. However, associated organizations and other groups with an interest in architectural history and preservation may make special arrangements for a tour. For further information, please contact the Fortnightly.